DEEPSPACE offers an expansive Play-to-Earn metaverse with lots of avenues for profit. Is cunning, strategy and space combat your forte? Is your winning strategy exploration and mining? Or maybe ship trading and upgrading is your path to riches.  There are many avenues for in-game rewards, and profit in the DEEPSPACE metaverse.
Gameplay
Earn rewards for cunning gameplay. Own and play your NFT starship assets in-game. Mine planets for resources, use them to upgrade your ships or sell on the marketplace for profit.
Dominate your enemies for in-game rewards. Trade ships and mined resources for profit. DEEPSPACE is built by gamers for gamers.
Exploration 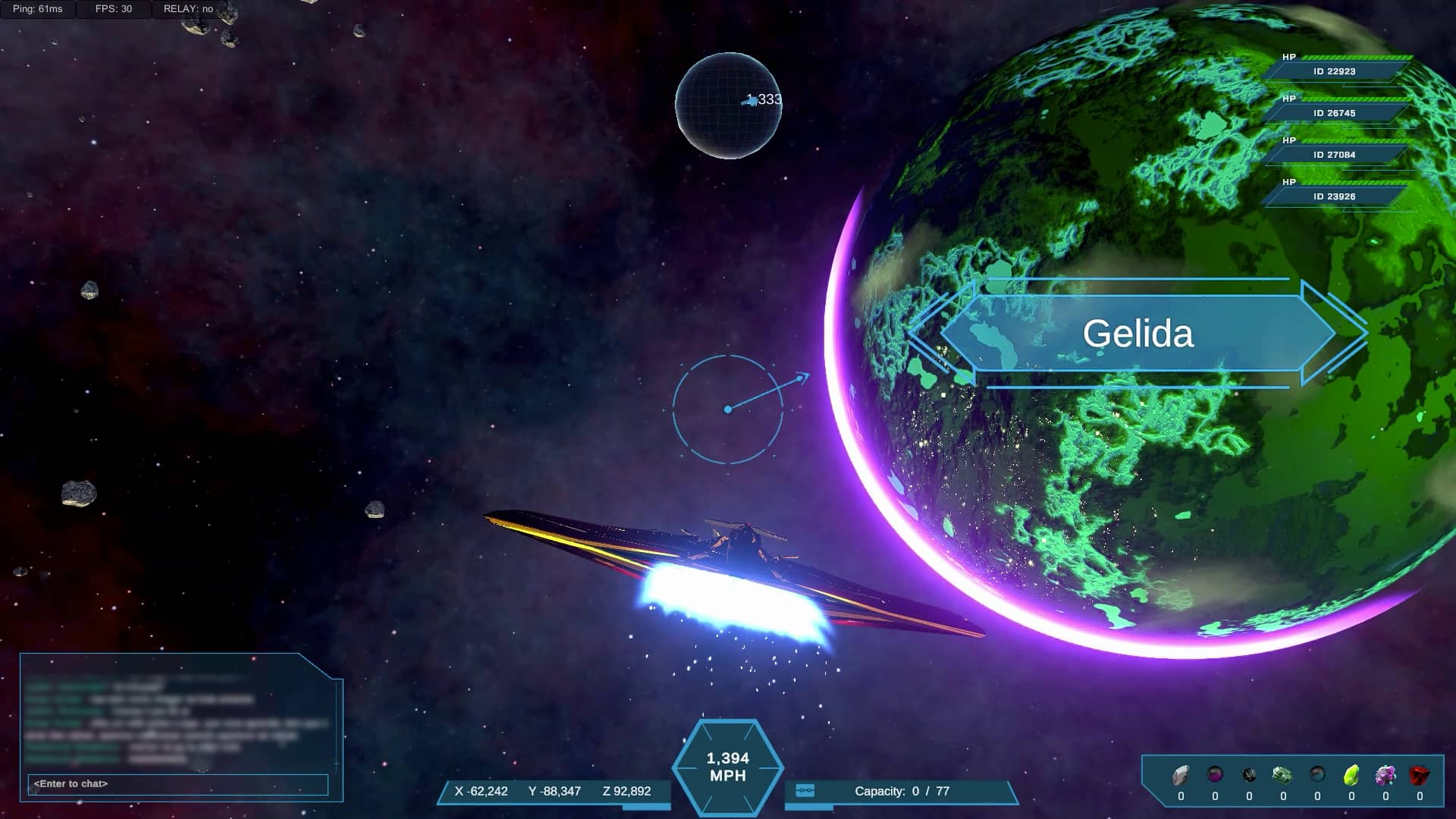 Explore the expansive DEEPSPACE metaverse. Travel to alien worlds, evade roaming pirates and enemies, be wary of wormholes that can jump you to the other end of the universe, and discover hidden riches as you explore the DEEPSPACE metaverse.
Mining
Mine the planets you discover for resources (from common ores and gases to ultra rare metals such as Promethium). Resources form the foundation for upgrading and leveling up your starships, and are the backbone of DEEPSPACE’s in-game economy. Use your resources to upgrade your ships, purchase equipment, make ship modifications or sell on our marketplace for profit.
Combat 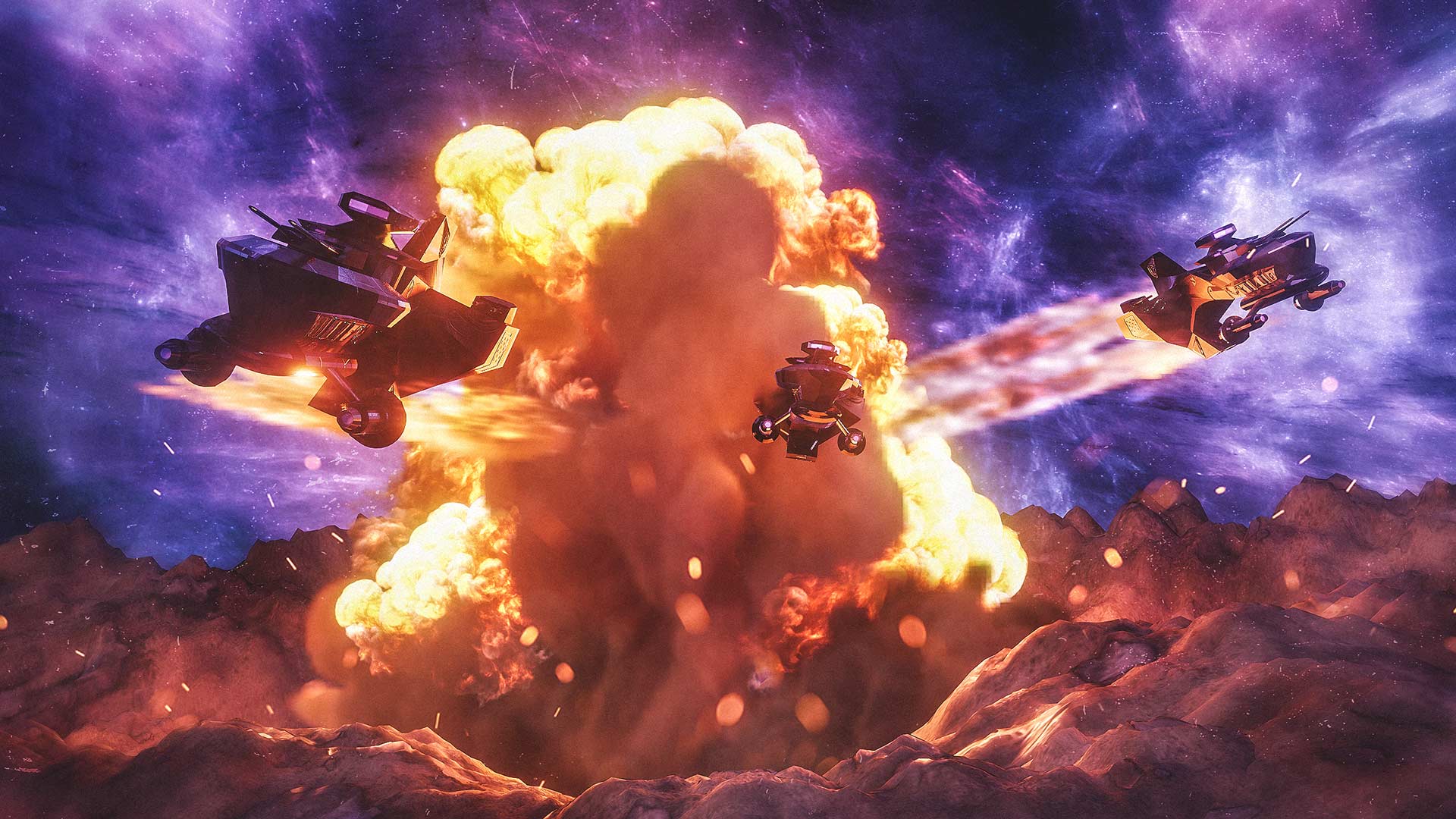 Chase fame and glory as you test your skills against other DEEPSPACE players, and AI players. Utilize your NFT ship squadron in strategic turn based combat to fully test your tactical decision making skills.
Engage in PVE, PVP, and Large Scale Combat to climb the leaderboards.  Algorithms will be used to match opponents fairly, a new player with a modest ship will not be matched against a veteran player, or an elite ship.
Smart NFT Ships
Ship Types
Stats
Cores

Unlike traditional NFTs, DEEPSPACE ships are playable in-game and upgradable. This required fiendishly complex coding and blockchain contract work, but it’s one of the many aspects that set DEEPSPACE apart from other blockchain Play-to-Earn games.
Ship Types

Fighters are designed to excel at combat! They feature state of the art weapon technologies that can deal incredible damage. 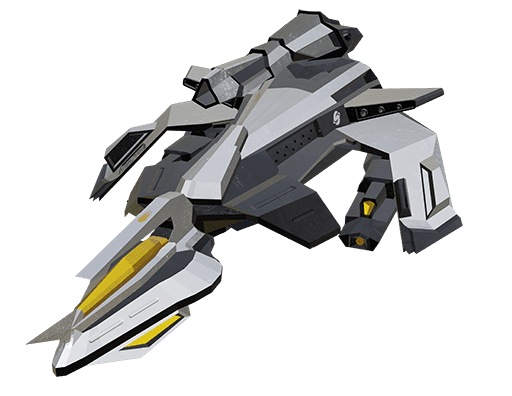 Tanks are optimized for managing enemy engagements, longevity, and withstanding lots of damage.

Miners are specifically engineered for efficient resource collection and removing obstacles on the battlefield. 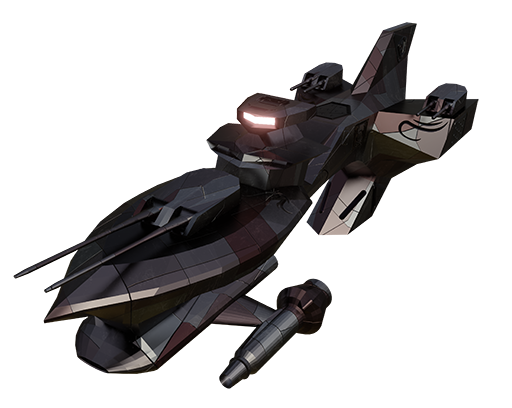 Support ships are built for versatility. They feature elite speed and maneuverability plus the ability to heal and boost the capabilities of your other ships.
Stats
The performance of a ship is determined by its stats. DEEPSPACE ships have eight unique stats. The total of the stats determines a ship’s star class (from one star to the elite 5-star). Each stat has a maximum value, that maximum value changes dependent on the stat and the ship’s type e.g. the max Speed for a Tank is 40 whereas the max speed for a Support ship is 100.

When buying a ship or playing one in-game, it’s important to have an understanding of the stats that determine the performance of your ship. Saying that, a good player in a low-stat ship could still defeat an average player in a high-stat ship if the former uses cunning gameplay. For more information on stats, see our documentation.

Cores
Cores determine if your ship has a type advantage over other ships, making your ships more effective at their roles!

Cores can also be used to create semi-fungible token (SFT) upgrades for other ships! They can be acquired by recycling your ships.
Resources
Bedasine
Seplium
Hydrogen
Iron
Xanifarium
Netherite
Fenna
Promethium

Resources form the foundation for upgrading and leveling up your ships, and are the backbone of DEEPSPACE’s in-game economy. You can acquire resources through mining or buying directly on our marketplace. Mining and trading resources are a key Play-to-Earn aspect of DEEPSPACE.
Bedasine 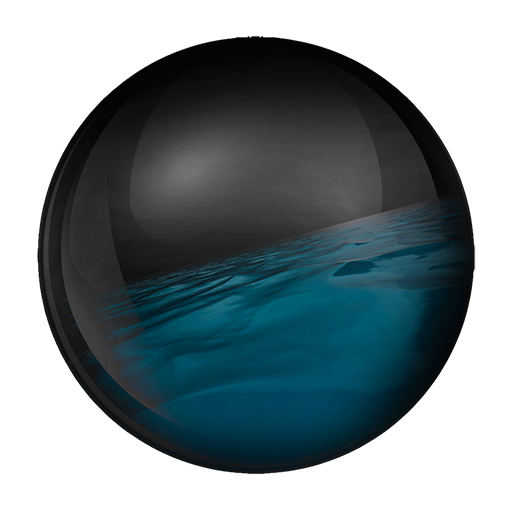 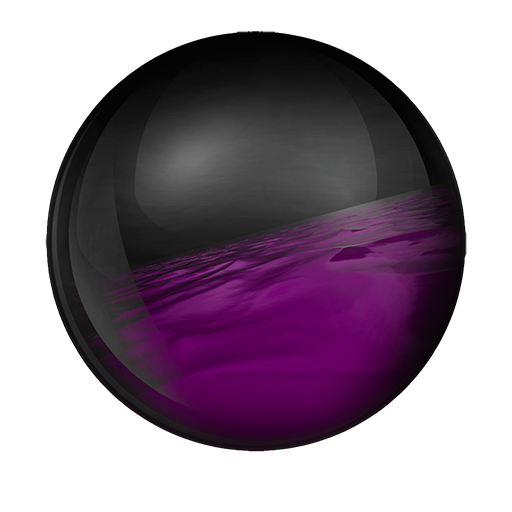 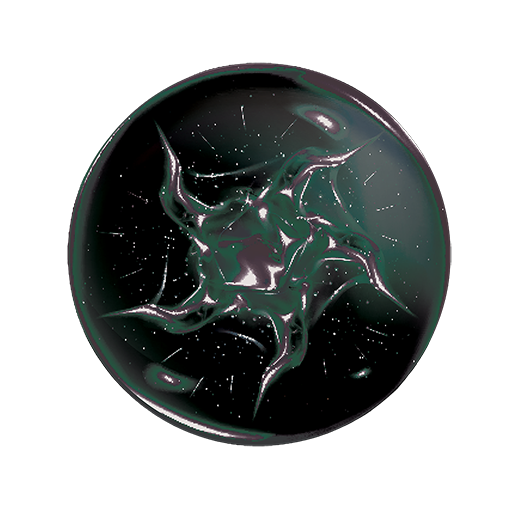 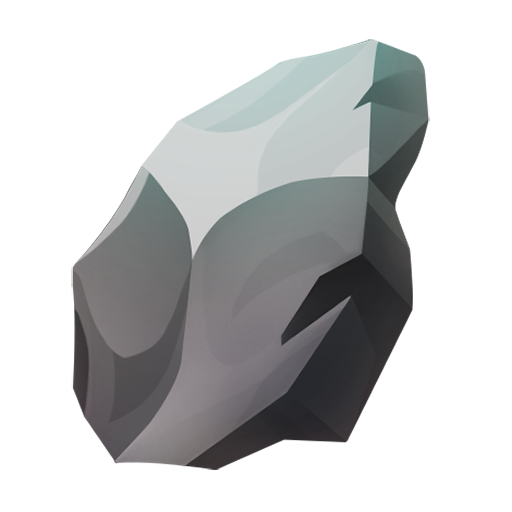 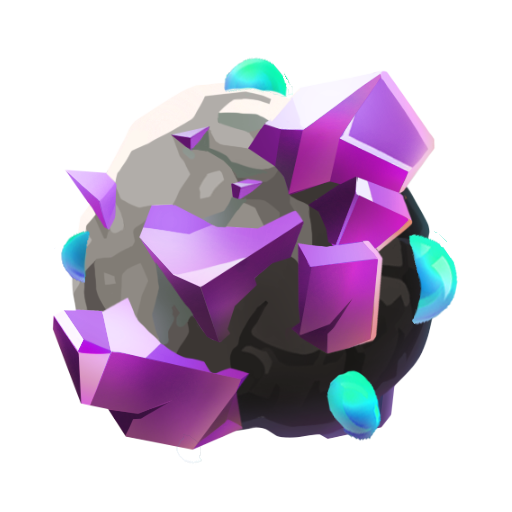 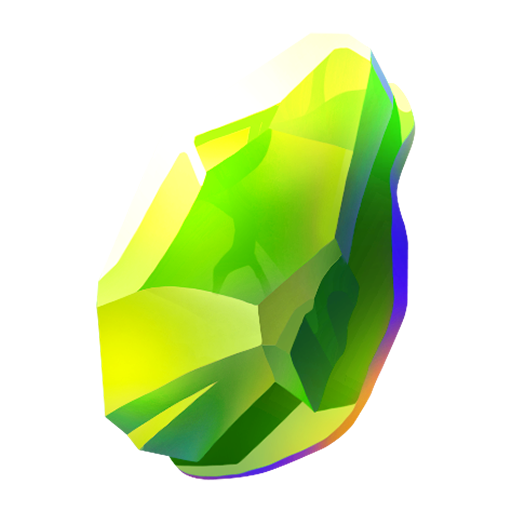 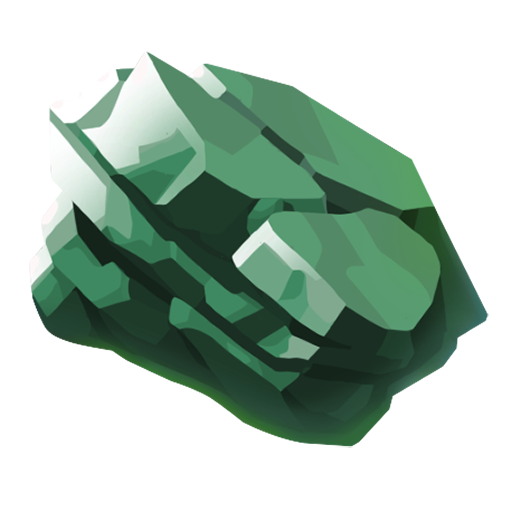 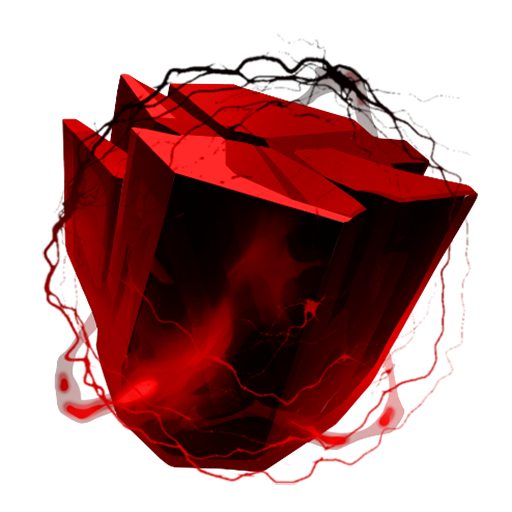 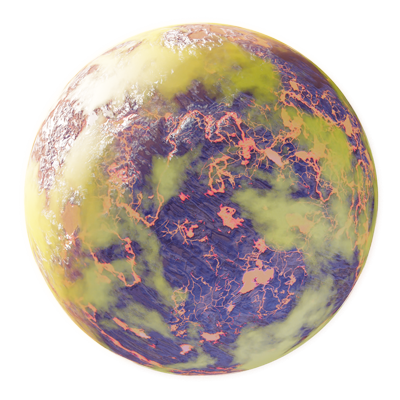 Desolate, superheated gas giant Mitra is the youngest of the 6 planets in the genesis realm. Filled with toxic smog, this body is rich in the vapor required to make fuel for spaceship propulsion and weaponized technology. The gnarliest beings in the galaxy made Mitra home 600 years ago and are very protective of its volatile resources as they put their civilization at an advantage when it comes to warfare.
Gelida 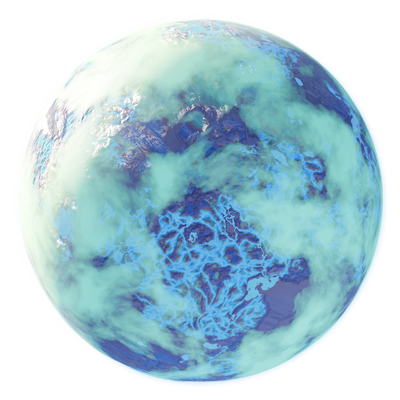 Gelida is the oldest of all masses found in DEEPSPACE, and is Cryo-Oceanic by composition. Frequent blizzards and extremely low temperatures exceeding -400 degrees farenheit are the result of being within proximity of solely far-reaching dust particulate and ionized gasses. For those that can withstand these conditions long term, Gelida is rich in precious metals and hidden technologies for superior hardware that will help you succeed in your widespread galactic exploration.
Athena 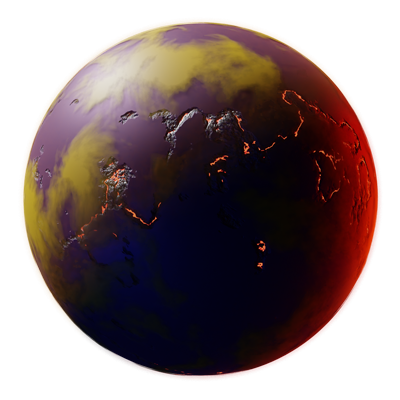 Athena is a relatively young lava exoplanet that is comprised mainly of purple bacteria due to the infrared signature of organic vegetation in its infancy. Athena is host to microbial alien life forms that mimic early signs of a future planet like Tyranus. A multitude of crude metals, metalloids, and gasses including but not limited to magnesium, calcium, and silicon are the result of a superheated magma core.
Tyranus 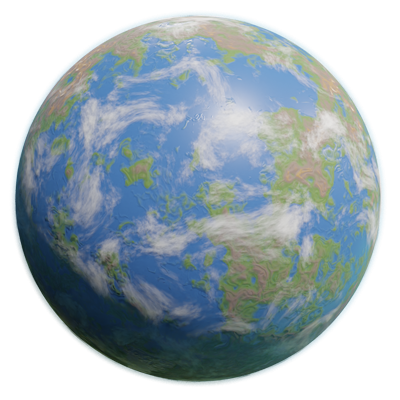 Being the largest of the 6 genesis planets, Tyranus is a Megaplanet home to the majority of the flora/fauna found in DEEPSPACE. It lends itself to being the most stable in regards to providing renewable and sustainable materials. Life found here has developed a balance of geodiversity and biodiversity due to the sustenance provided by Tyranus' perfect blend of atmospheric conditions and readily available water.
Vorvoid 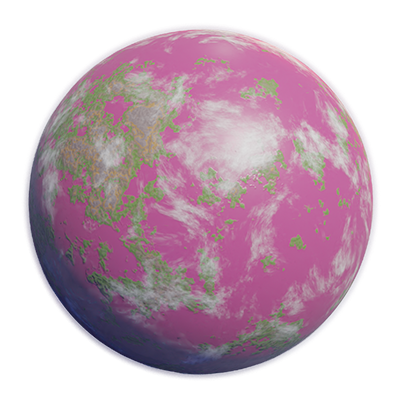 Ammonia, Formalin, and other useful chemicals make up portions of Vorvoid's noxious and unstable non-land environment, deeming it an appropriate place for medical and experimental resource gathering. Although it's non-land composition is well documented, Vorvoid's terrain is home to some of the most mysterious and exotic beings in DEEPSPACE.
Melas 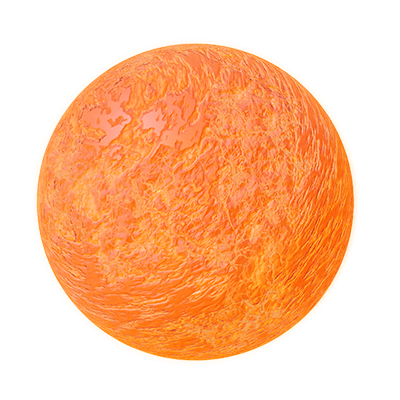 Melas is the most centrally located planet in DEEPSPACE and is a plasma that has constant ongoing nuclear fusion that emits light in visible, UV, and infrared form. Only those specially equipped can venture here, let alone be hosts to its extreme conditions. Melas is primarily made up of hydrogen and helium as well as modest amounts of iron and carbon.
Chaldene 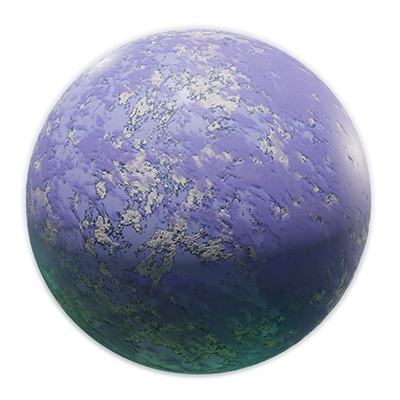 Chaldene is a colonized and domesticated starting planet owned by the galactic government for users to mine for very basic resources that are centrally and reliably controlled. Chaldene is a safe planet, so resource collecting here poses very little risk.
Factions
Confederate Dominion
Spear of the Empire
Nomadic Tribes
Neo-Nautilus

Do you desire to explore and fight in DEEPSPACE as a free spirit sole wayfarer, or join a faction? Or maybe through your adventures, you will befriend other Deepspacers and join them in alliances. Or do you crave ultimate power as the head of a faction or guild?
The Confederate Dominion

“At any given moment, a nation’s people must be prepared to pay fully the heavy price of freedom. It is not great weapons or grand designs that ensure the survival of a species, but the unshakeable will & resolve of its men.”
Home Planet: Tyranus

A loose confederacy of various mining colonies banded together by their ultimate need for survival. Notorious for the usage of retrofitted mining vessels as second-tier flagships & weaponized tankers - The Confederacy has managed to take hold of the majority of available asteroid-mined resources in the system in recent years, becoming somewhat of an entrepreneurial titan within its boundaries. While The Confederacy is only the second-largest faction within the Genesis system - the sheer willpower of its people and abundance of resources has paid its dividends in the shape of guaranteed respect from both friends & foes alike.
The Spear of the Empire

“Devoid of discipline and law - only chaos and death remain, and humanity pitted alone against the dark and vast nothingness of space itself. The Empire is Order. The Empire is All.”
Home Planet: Chaldene

A titan of technology - this large branch of the Great Empire located in the Genesis system is both ruthless and regal. The Spear is tasked with the destruction of any and all contesting powers within its boundaries, and - ultimately - with the eventual liberation of all of its peoples. While the largest portion of the Genesis System is currently seized under its control - flares of resistance remain defiant still. And as the fires of industry burn within the frigid coves of the frost giant Chaldene - the cold beating heart of the Empire - a new great war looms over the horizon - one of ultimate cost, cause, and conquest.
The Nomadic Tribes

“Beyond rules. Beyond law. Beyond limitation.”
Home Planet: Vorvoid

It is said that the Nomads are the true indigenous peoples of the Genesis System. And it is in the sunless wastes of its farthest & most dangerous reaches - on the acid surface of their home planet Vorvoid - where they make their relentless stand against those who would invade their homes and tarnish the legacies of their ancestors. The sheer number of stray Nomad ships - seemingly darting around the battlefield out of nowhere - can inflict terror upon the most veteran of flagship crews in the system. Their weapons are sharp. Their ways - lethal. Their appetite for destruction – unquenchable.
The Neo-Nautilus

The remnants of a once-great empire that spanned over a large portion of the Genesis System. The Neo-Nautilus is a faction hell-bent on recovering its former position & glory among its recent peers. Still armed with supreme futuristic technology left over by their predecessors - they intend to use their ancestral gifts as tools to claw their way back to supreme dominance. Now stuck between the ceaseless conflicts of larger factions - the Remnants are willing to do whatever it takes to ensure the survival of their ways. No road is too steep. No risk is too great. No cause is more worthy.